City breaks are my favourite type of holiday and this year I hoped to visit the USA on an epic city hopping tour taking in New York, Seattle and San Francisco.

Hopes and reality however, are two very different things and with a house to buy and eye-wateringly expensive flights getting in the way – the American Dream was on hold.

While the US trip got away from us this time, husband and I agreed to a more affordable Spring Break and with an abundance of great European cities practically on our doorstep, the holiday search moved closer to home.

Cost and ease of travel were always going to be deciding factors and considering Belfast is not blessed with lots of direct flight routes, our options were limited.

There was one place family and friends kept recommending, “You couldn’t spend money in it!” they said, and that was Krakow in Poland; the fact it has also been name best budget city in Europe for 2019 was an added bonus.

I knew that the Auschwitz concentration camp was close to Krakow, but little else about this beautiful old medieval city in southern Poland that is fast becoming one of Europe’s most popular short break destinations.

With a wealth of cultural attractions including museums, galleries and the magnificent Wawel Royal Castle overlooking the city – Krakow is one of the oldest urban centres in Poland.

Europe’s largest medieval market square is situated in the heart of Krakow’s Old Town; this UNESCO World Heritage site is beautifully preserved with many historic town houses and buildings dating back to the Middle Ages.

Visitors can also take day trips to Wieliczka salt mine which lies on the outskirts of the city and the infamous Auschwitz and Birkenau Word War Two concentration camps which are just over an hour’s bus ride from Krakow.

While visiting Nazi concentration camps might sound like a morbid sightseeing activity, I would recommend it to truly understand the scale and enormity of what happened in Europe during World War Two. For history buffs, guided buggy tours are a great way to see the Jewish Quarter and Ghetto in Krakow and to learn about the city’s turbulent history.

In addition to being named best budget city, Krakow has also beaten off cities like Lisbon to be awarded the title – Capital of Gastronomy Culture for 2019 – and with 25 eateries recognised in the Michelin Guide’s top choices for Poland – the city is garnering quite a reputation as a destination for good food.

There are lots of charming cafes, food markets, bars and restaurants scattered around the Old Town streets and within the Jewish Quarter – the former being the more expensive and main tourist area -and from traditional Polish fayre to European favourites, I was pleasantly surprised with the quality of food on offer.

It is well worth spending the extra few Zlotys to dine in the market square; on a nice day this is the perfect place to soak up the atmosphere, admire the surrounding buildings and indulge in a spot of people watching.

Entering this beautiful market square feels like stepping back in time; it has a real old world feel with the Cloth Hall located in the central part of the square, and Saint Mary’s Basilica and the Town Hall Tower on opposite sides, architecturally it is a real feast for the eyes.

During our visit, we dined at two different restaurants in the market square, after a busy morning sightseeing, Café Art was the first to lure us in with its promise of traditional Polish cuisine.

I choose the mixed dumplings with three different fillings; meat, potato and cheese, and cabbage. I was sceptical about trying the cabbage version – in my neck of the woods cabbage is boiled and served with spuds not encased in dough – surprisingly it was soft and sweet with onion and this was my favourite of the three.

Husband chose the Polish stew served in a bread bowl and I knew he picked well when the scent of smoky paprika drifted from the bread bowl before he’d even lifted the crusty lid. It was a tasty stew packed to the brim with meat and there is something fun about eating the bowl as well as the soup.

Our second trip to the market square brought us to a lovely Lebanese restaurant called Sphinx in search of a few drinks and something light to eat.

We decided the classic mezze – a Middle Eastern platter of falafels, Lebanese koftas, tabbouleh, pitta bread – would tide us over sufficiently and it was a chance to try something very different. 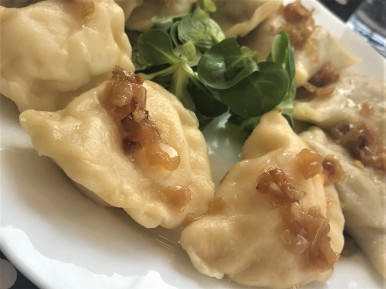 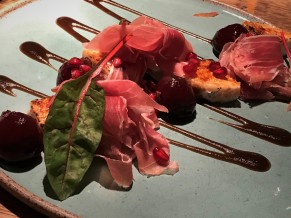 The tabbouleh – a cold salad of parsley, mint, finely chopped tomatoes, onion and bulgur wheat was, citrusy, fresh and very moreish; I will be working on my version ahead of barbeque season.

Even though it is the more expensive area, the majority of restaurants around the Old Town are very affordable and a similar quality of food would cost twice as much in Western Europe, and for the more sophisticated diner there are also a number of fine dining restaurants to choose from.

The highly acclaimed French restaurant – Cyranno de Bergerac – had been recommended to us and after a once over the online menu it didn’t take long to decide this was one treat we could afford.

Tucked away in a beautiful candlelit cellar just off the main square, the restaurant did have an air of fine dining about it, but the friendly and well informed waiting staff made us feel relaxed and at ease.

To start I had saffron duck ravioli which was soft and had a strong meaty flavour; topped with burnt gingerbread crumbs, this surprise element added crunch and a richness to the dish.

For my main course I had guinea fowl with chestnuts, pumpkin puree and lavender sauce. The lavender sauce was dark, sticky and intense and the last remaining crusts from the bread basket were used to soak up the last dribbles on my plate.

Husband had the dear medallions with rhubarb and rose for his main course; when the dish arrived at the table, it looked like meat and rhubarb crumble; while I was sceptical it could work the blend of sweet and sour was a marriage made in heaven.

While dinner at Cyranno de Bergerac was the most expensive of our trip – roughly £75 for two courses each, a bottle of wine and two cocktails – it was worth every penny in my book.

On our final night in Krakow, we stumbled across Restauracja Pino, a modern and cool Italian restaurant, hidden away on a side street just off the main square.

Craving something comforting – weather wise our last day was cold and damp – I ordered the pumpkin soup for starter; sweet, creamy and with a touch of ginger and chilli, it certainly warmed the cockles.

At the risk of turning into a pumpkin, for my main course I chose chicken stuffed with mushroom, spinach, carrot chips and you have guessed it, pumpkin puree.

On Irish soil, it would be unthinkable to serve this dish without some form of potato, but who needs mash when sweet pumpkin, carrot chips and spinach with creamy feta cheese were inspired – and adequate – trimmings.

Husband chose the caramelised goat cheese with beetroot to start, it looked really appetising and I reached over for a nibble on more than once! The chorizo and tomato pasta dish he had for his main with olives and broad beans also didn’t disappoint.

As it was our last night we decided to be indulgent and I picked the chestnut parfait with caramel whiskey sauce and apple compote for dessert. Again the marriage of flavours, infusing sweet and sour was delightful; overall I was very impressed with the well thought out menu and had we discovered this place on our first night, would surely have returned.

And finally, no trip to Krakow would be complete without sampling some local vodka and if you manage to make it through the door, the Wódka Cafe Bar is premier place to visit; in a world where gin is king I had found my spiritual home.

Basically this tiny little bar serves vodka tasting trays for around 40 to 50 zlotys and has every flavour you can image including caramel, hazelnut, rose and quince to name a few. Being a vodka connoisseur is not essential – they serve other alcoholic beverages too – although a fondness for the clear stuff probably helps.

I enjoyed the experience so much, a bottle of caramel vodka was purchased as a souvenir; it is chilling in the fridge for such times when we need a little treat and a reminder of our lovely Spring Break in Krakow.